When I discovered that my girlfriend Sophie had never had the experience of visiting the New Forest before, the plan for our day off was immediately realised. Sophie was staying at mine for a few days and since I had to work Monday, we really wanted to make the most of our time off on Tuesday. The week after week heatwave the UK had been experiencing showed no intentions of having a rest. It had been a while since my last visit to the New Forest (my last blog post actually, oops) and I was raring to go, to hear the silence, breathe the fresh air and seemingly endlessly explore. More importantly however, to share with Sophie the wonder of wandering these peaceful forests…

On arrival and upon entering the woods, I was surprised to find the ground still slightly marshy despite several weeks without rainfall. Certainly, it appeared the land had lost its colour, almost as if someone had generously lowered its saturation. The vibrant palette of greens I was accustomed to being graced with were nowhere to be admired. Only the green of the trees overwhelmed with the heat stood atop the faint yellow shades of grass. Punchy crunches syncronised alongside our footsteps, breaking the silence that smothered the sunkissed arid land. It wasn’t long before entering these woods that I was reminded why I love the forest so much, for many reasons. The complexity of traversing the scenery and natures’ growths. We’re privileged guests on foreign turf, we abide by the diligent ways we must manoeuvre throughout the expanse of what we find. Jumping over those dry riverbeds, dipping under those trees and fumbling through those spikey bushes we go, onto whatever awaits us ahead. There are rarely paths set for you, only the ones you create with your forward planning. The freedom of direction I would put it. In a world where pavements, roads and railways dictate our journeys, the journey is yours in these lands, providing you can pass the obstacles of nature in your wake. Importantly to add is the absence of sound and distraction. Providing your technology is silent (as it should be), the only sounds to bless one’s ears would be resulting from oneself, the happenings of physics or that of creatures and wildlife. The birds, flies, midges, grasshoppers, crickets, movements from deer, horses and small animals. You enter a world of tranquillity, bare of all that modern life offers. An experience more primitive than you’d have at home or work. Sure, you’re prepared. You have water, food, GPS, a camera or whatever you’ve brought along, but aside from these, it appears to me at least that the less you have here the better. The better for appreciating your situation and the beauty of what surrounds you and the freedom it supplies. Few journeys or walks are paid as close attention to than one of wandering through the forest. Being careful with your footing and surfaces, listening out for noises and trying to remember your bearings and direction. Slightly more enjoyable and engaging than a generic walk down the street back in your hometown. I can’t help but welcome the immersion.

Contently we walk and explore the expanse of nature’s beautiful manifestations, not giving too much thought to where we are heading, but just existing in the moment, hand in hand, step by step, acre by acre, in pleasing togetherness. Whenever I visit the forest, I always hope to stumble upon some deer, preferably close by. I find them fascinating, made even more appealing by their timidity and rarity to have one in your sights for long. I frequently suggest periods of silence and non-movement for a few minutes, just in hope that an unsuspecting deer runs into our path. The forest is quiet today, no rustle or bustle in our vicinity. Twice we spot a deer during our first two hours of wander, but it’s far in the distance. Close enough for it to acknowledge our presence, but too far for us to admire it in its untarnished behavioural glory.

Still enjoying our forestry exploration despite few deer and surprisingly no horses, we continued ahead. Spotting a watch-tower ahead in the distance, we approached, grateful for the opportunity to have a rest, a drink (and a croissant) with the added vantage point. The watch-tower was sturdy, easy to access and provided good lines of sight over the vast expanse around us. Some barren and deforested land, some tall and deep forests. We waited, peacefully. Not talking much, but just enjoying each other’s company and the silence the woodland brings. We weren’t expecting to see much wildlife activity given how little we saw from over two hours of walking, but oh how blessed we were about to be. I spotted three deer, far off in the distance, on the perimeter of the land stretching out in front of us. We looked, keeping unnecessarily quiet given the distance between us and the trio. Despite being far away, it was lovely to see them graze and naturally explore. On the edge where the looming trees met the desolate expanse, they disappeared back into the woods. We thought that was it. After five more minutes, Sophie spotted that they had reemerged, this time with intentions of traversing the land, and much to our pleasure, in our direction. Slowly but surely, they headed our way. Slightly to the left of us, aptly put, they entered our neck of the woods. We couldn’t believe it. Here we were, sitting silently way above the ground, gazing down upon the steadily approaching deer. They were getting closer, gracefully. Before minutes, they were in very close proximity. If I ever had to be as quiet as possible, I knew it was now, and Sophie knew it too. We wanted this moment to last. To be a voyeur of the delicate and timid creatures down below. There were three. Presumably a mother doe, and two of her offspring, one of them an evidently young fawn. Sophie and I were beaming. We couldn’t have hoped for a more heartwarming moment. To observe from above these remarkable animals go about their business of curiously grazing, devoid from the knowledge of our presence, was blissful. Their behaviour in its truest form. No fear, no high alert, no ideer we were there. Oblivious. I felt like I had the power of invisibility, and it opened a host of harmonious interactions not usually possible with being this close. Of course, the added height helped, since the deer rarely looked upwards and were too focused on finding the gradually diminishing supply of vegetation. For us, we were just grateful to experience a moment that due to the renowned timidity of deer, people rarely get to see or feel. We just stared down, smiling, and it was such a simple pleasure. Fortunately, I enabled silent shooting on my camera, so all shots were taken covertly. The fawn also sneezed; the cutest sneeze I’ve ever witnessed. What a bonus.

We were only fifteen or so feet up however, so the odds were that eventually, no matter how silent we remained, it was likely we would be spotted. This came after around five minutes when the baby fawn looked up and froze. It was lost on how to react. For ten seconds it stared, locking eye contact with Sophie and I. Its mother still unaware. Suddenly, it dashed off in the opposite direction to us, hopping quickly for such frail and inexperienced legs. The ground crunching beneath, this startled the mother, who looked around and quickly spotted us too. We remained still, not making any noise. She did too. The mother was caught in limbo. Potentially perceiving us as a threat, she was presumably indecisive about turning her back on us to chase after her young. She too froze. She let out what I can only describe as a loud ‘dog-like’ grunt. A danger call perhaps, or a call to attract attention? Either way, she darted off soon after in the direction of her young, sounding these calls numerous times as she hopped off into the distance. The other deer followed. We hope they found each other and weren’t too startled by our presence. We left and headed back to the car shortly after this, reminiscing appreciatively and smiling most of the way.

I increasingly love the forest and nature’s ways on every returning visit.

Here are some pictures:

(the horses were spotted on the way back to the car) 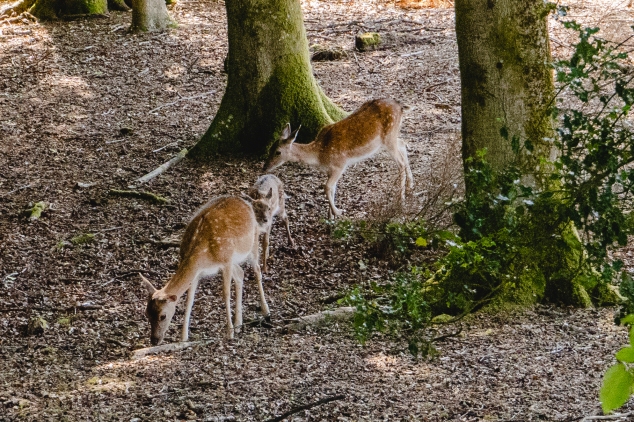 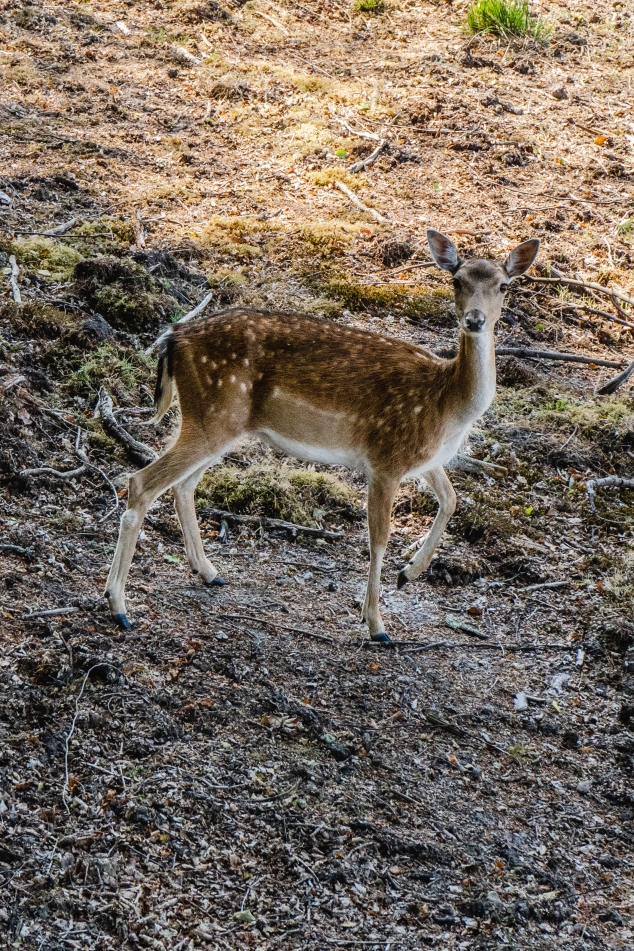